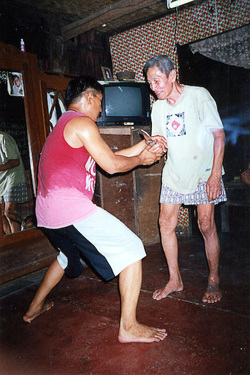 Late Gregorio Ceniza with his son
Some peolple say that knife or the dagger is the backbone of the Filipino Martial Arts. From a perspective, this is somehow true. One of the least-known martial art in Cebu is Baraw Sugbo, a dagger oriented system. Formerly this was know as Arnes Diablo but was changed to a better sounding name. The Word “baraw” is a Cebuano Visayan for dagger while Sugbo is an alternative name for Cebu.

Its knows history started with Lorenzo “Ensong” Saavedra, a patriarch of eskrima in Cebu. It is said that Saavedra allegedly learned the rudiments of this dagger art from an unknown Frenchman, his co-inmate while he was still serving his term in prison.

Baraw Sugbo as a system was not taught to the eskrima students of Saavedra, but exclusivly to a certain Simo, who in turn taught this to Lucresio “Okit” Albaño (d. 1995). Okit in turn his nephew Gregorio “Oyong” Toledo Ceniza (1925-2007) of Maguikay, Mandaue City. From Saavedra to Oyong, the art was transmitted privately, one at time. The practice sessions were done in secret that according to Oyong there were times that they had to cover with a blanket while practicing the dagger just to make sure nobody nearby could watch and copy their techniques. But it was Oyong who started to go public, teaching many interesed individuals the arts.

Cronnie Oplado Cabatingan and Aproniano “Rene” Atuel Capangpangan (1953-2000) learned the complete curriculum of this Brand of knife fighting. Cabatingan studied directly from Okit Albaño and Oyong Ceniza. Cronnie Cabatingan and Eduardo “Boy” Sabal Ceniza (Oyong’s son) continue to offer tuition to those who are interesed to learn this craft. It is also very interesing to mention that earlier Balintawak members like Anciong Bacon, Delfin Lopez, and Eduardo Baculi, Sr. Had close  association with this knifer  group in Mandaue. Baculi even  taught Ceniza his “dos manos” eskrima. This is easy to understand since all of them were directo r indirect followers of the great Lorenzo Saavedra. With Oyong’s approval it was Rene Capangpangan who changed the name Arnes Diablo to Baraw Sugbo. Baraw Sugbo training is mostly done with a training partner in an interactive drill, in the same manner eskrimadores do with their sticks. It has training drills while standing and while rolling on the ground. Just like other “corto” range approach in eskrima , the live or checking hand plays an important role. Instead of memorizing many disarm techniques common to other dagger fighting styles instead one will be learning a flowing maneuver of counter and counter to counter just like the “palakaw” of eskrima. The students Exchange roles so that both the defender and knife wielder’s view are familiarized. This is obviously a derivative of eskrima because it shares common principles and strategies of eskrima and of course the history of this martial art can be traced back to eskrima.

Extract of the great book : Cebuano eskrima, Beyond the myth